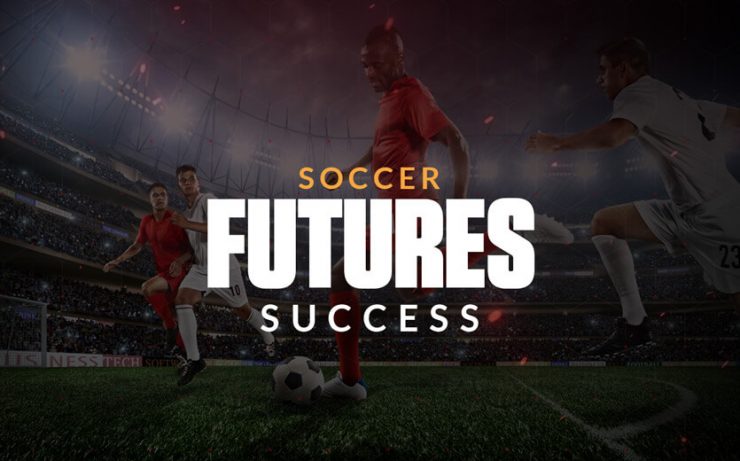 When betting on futures in soccer, you’ll quickly see that there are many different options.

Bookmakers will offer numerous futures or outright bets for most leagues at the start of the season and slowly pair them down as the season moves along. To get you ready to make your first futures bet on soccer, let’s take a look at some of the most typical outrights you can bet on.

You may no longer be able to find odds of +500000 for one of the minnows to win the Premier League, but you should still be able to get your fix in the futures market.

After bettors cashed in on Leicester City’s 5,000-1 win at the Premier League in 2016, bookmakers have been a little less generous in setting lines for soccer futures betting.

The English Premier League (EPL) is the most popular league in the world and will work as a great example for the types of futures bets to look for.

Markets to place a wager on a team to win outright will often open far in advance of the season starting. These markets will close once games begin each week during the season, but open back up with adjusted odds at the start of the following week.

Some season-long futures bets will close once the season begins, so be sure to check the rules of your chosen sportsbook.

This is the most straightforward futures bet you can make. Regardless of the league you’re betting on, to win outright simply means who will win the title at the end of the season.

Predicting Which Team Will Finish Top 4

In a league such as the EPL, there is a great significance to finishing within the top four places even if you can’t finish first. A top-four finish in the EPL will qualify a team to participate in the following season’s Champions League tournament.

Of the top five leagues, this will be a standard bet except when it comes to France. Considered the lesser of the big five, only three spots from France’s Ligue 1 are reserved for Champions League, meaning a top three-bet is usually offered for Ligue 1.

Think of it like NCAA basketball or football, where not all conferences are created equal.

Betting on a Top 6 Finish

To finish top six is a typical bet of the Premier League. Traditionally, there are six big clubs in England. Those being: Arsenal, Chelsea, Liverpool, Manchester City, Manchester United, and Tottenham.

You may not find a ton of value betting on any of those teams to finish top six; however, if you’re feeling optimistic about any team outside of the big six, there’s usually value to be had.

Top Half and Bottom Half Finishes

Outside of more prize money awarded, there are no real implications for teams finishing in the top half versus the bottom half of the table. But that doesn’t mean it can’t be profitable to bet on.

Your best bets will likely come from focusing on one of the mid-tier teams and taking a position on whether you feel they will over or underperform on the year.

Here is where things get a little different than what we are used to with North American sports. In most countries and all of the major leagues, teams are subject to relegation.

In the EPL, the bottom three teams at the end of each season (18th-20th), will be relegated to a lower division, which in this case is a league called the Championship.

This forces teams who may be far out of the title race to continue to push on all season long to avoid relegation. From a betting perspective, the race at the bottom of the table can sometimes create more betting opportunities than the one at the top.

This is not the case in Major League Soccer (MLS) here in America. MLS follows a more North American format without relegation, while also using a playoff format to decide a winner. Read more about how soccer in America differs from Europe here.

For some teams, avoiding relegation can be seen as more important than even winning the league. For some, the finances available will likely never allow them to compete near the top of the table.

However, competing in the Premier League compared to competing in a lower division is the difference of millions and millions of dollars. For this reason, betting on a team “to not be relegated” can also present an exciting wager.

The other relegation-type bet offered at some shops is “to finish bottom”. Here you’re not only betting on a team to be relegated but also for them to finish rock bottom in their league.

Which Teams Stand To Be Promoted?

So if three teams are being shipped out of the Premier League each season, how does it maintain 20 teams each year?

Just as relegation is unique to soccer, so is promotion. The Premier League will also add or promote three teams from the Championship division at the end of each season.

Promotion is also a type of wager you should look for when following some of the lower leagues. You won’t find this bet in the Premier League bet section, but dip down into the Championship and you will find bets like “to be promoted” and/or to “to finish top 2”.

In the Championship division, the top two teams earn an automatic promotion while teams three to six compete in a playoff-style format for the third promotion spot.

While each country’s relegation and promotion methods will vary slightly, both can be found in all major leagues.

Who Will Be the Top Goalscorer in Their League?

If you’re still wrapping your head around the Pro/Rel concept and want something a little more straightforward, then why not bet on your league’s top goalscorer. Just bet on which player will finish with the most league goals at the end of the season.

Most of the bets mentioned above are pretty typical for more major leagues, especially the Premier League. Be sure to check your sportsbook for an even larger betting menu for some leagues.

To Win Without Bets: Unique to Soccer

In some leagues, there are traditionally one or maybe two dominant teams that win their leagues almost every year. Betting on one of these teams to win their league will typically return extremely short odds. To counter this and to offer bettors more value for their money, bookmakers will often offer the wager “to win without.”

While success in any sport is cyclical, historically a few teams in the major European leagues will usually be involved in these bets. Examples include:

In each of these examples, you’re betting which team will come second or maybe third in their respective leagues.

In the “to win without” context, you’re betting if your selected team would win the league if hypothetically the perceived top team did not exist. Of course, if your team ends up finishing above that team anyways, you would still cash your wager.

You Can Bet on Order of Finish

When betting an order of finish, you’re betting on the exact order of how a selected group of teams will finish in the table at the end of the season. For instance, maybe you’re betting on Liverpool to finish first and Manchester City to finish second in the Premier League.

For you horse racing enthusiasts out there, this type of bet would be similar in a way to betting an exactor or an exactor box.

When the NFL’s schedule is released, one of the most popular betting exercises is to bet on season win totals. The equivalent in soccer betting would be to bet on season point totals. Here you’ll be betting over or under or exactly how many points a selected team will finish the season with.

PFA Player of the Year

A Premier League bet on the season MVP of the league. The Professional Footballers’ Association Players’ Player of the Year is awarded to the player judged to have been the best of the year in English football.

With so many tournaments across different leagues, it’s feasible that in one season a team could win several trophies. Bets like “to win double” or “to win treble” would relate to winning either two or three trophies.

An example of winning a treble could be Manchester City winning the Premier League, winning the FA Cup, and also winning Champions League.

When major tournaments like the World Cup and Euro Cup come around, additional wagering opportunities will become available. The outright winner’s futures markets will be your most straightforward means of betting, but other options exist.

The opening rounds of the World Cup and Euro Cup begin with all qualified teams placed into groupings. Typically two teams from each group will advance to the knockout round. As such, bettors have the ability to wager on which teams they believe will advance out of each group.

Betting on the order of how teams will finish in their group is a very common bet during soccer tournaments. If four teams are in Group A during the World Cup, you can bet the exact order of finish of those four teams within their grouping.

Predicting the Stage of Elimination

Major soccer tournaments will begin in the group stage, before moving into the Round of 16, quarter-finals, semi-finals, and finals.

When betting on soccer futures, you can wager on which stage of the tournament a team will be eliminated at.

You can also bet on positive achievement and bet which stage a team will make it to. In this case, you may a bet on a team “to reach quarter-finals” or “to reach final”. This means you’re betting on them to reach a certain stage of the tournament, but not necessarily to advance past that point.

While these tips will give you a great foundation for your tournament futures bets, be sure to check out the differences between betting on tournament game lines compared to regular game lines for more ways to bet soccer.

Ready to Pick the Next Winner?

Think you can pick out the next Leicester City? With so many leagues around the globe, your opportunity to bet on soccer futures are endless. Remember, when betting futures, unless your chosen book offers a cashout feature during the year, your funds will be tied up for the duration of the season. Be sure you’re alright with having a portion of your bankroll unavailable for a lengthy period of time.

Futures not your thing? Just want to bet this weekend’s games? Head on over to our How to Bet on Sports guide and read up on more ways to bet soccer.