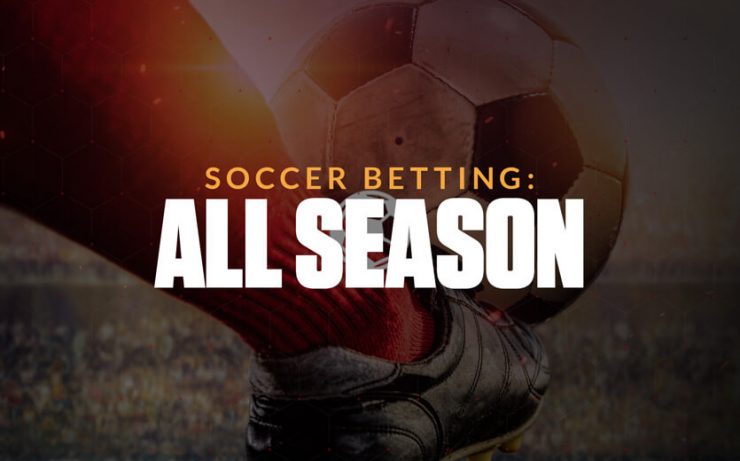 If you’re looking for a sport that you can bet on nearly year-round, then soccer may just be the sport for you. With the immense popularity of soccer around the globe and nearly every country running their own leagues and multiple divisions, you should always be able to find a match to get some action down on.

In the following section, we’ll take a look at what a typical soccer season looks like including some of the major leagues and tournaments, as well as what to expect from Major League Soccer in America.

Who Needs an Offseason?

If you prefer betting on a team from one of the five major European leagues (English Premier League, German Bundesliga, Italian Serie A, Spanish La Liga, and French Ligue 1), then your soccer betting season begins in August. Each league typically begins its season at various points in August.

However, the betting action doesn’t stop at the conclusion of the regular season. While for many players it may be time for a well-deserved rest on a faraway tropical paradise, for the players that are involved on a team in the Champions League continue to play until late May or early June when the final tournament takes place.

Considering many teams will begin preseason friendly matches and tournaments (which you can bet on, of course) around mid-July, you can see that you won’t have to wait long to make your next soccer bet in between seasons.

Soccer Betting Affords You A Plethora of Betting Opportunities

If you’re new to soccer betting you might be familiar with the fact that there is not only a regular season, but something called the Champions League, as well as many other competitions that seem to all run at the same time. You’re probably wondering how this is all possible?

Most countries have one top league with several divisions or leagues below that players can be both relegated to or promoted from. Be sure to read more on soccer’s promotion/relegation format here.

Let’s look at a country like England. The Premier League has 20 teams competing for the title. However, beneath those 20 teams, there is a second division (the Championship), third division (League One), fourth division (League Two), fifth division (National League) and then countless more divisions below that.

Domestically these teams will compete within their own leagues, but then also in country-wide tournaments like the FA Cup and EFL Cup, now more commonly referred to as the Carabao Cup. In the case of the FA Cup, over 700 teams from across all levels of play in England participate.

Don’t think of the soccer season as just your team’s regular season, but of a season made up of all of these competitions.

However, while domestic competitions start and end during the course of the same regular season, placement in European competitions are contingent upon how a team finished in their league the year prior.

As you can see, even if you aren’t in contention for the Premier League title, there is still plenty worth playing for. And also plenty worth betting on.

To make another basketball betting analogy, imagine if the Golden State Warriors played an NBA regular season game one day, then a few days later played a tournament game against a team from the American Professional Basketball League or NBA G League. This is under the fictional assumption that the G League was not affiliated with the NBA and that a tournament where every American team from any league could participate in existed.

Then take it a step further and imagine Golden State, had they won the NBA finals the year before, had also been entered into an international tournament and had to play another title-winning team from a country like Mexico, Argentina, or maybe Spain the week after.

All of the competitions discussed thus far, have been strictly from a club team perspective. Club teams are the Manchester Uniteds, Liverpools, Chelseas, and others from the Premier League; or teams like PSG, Juventus, Barcelona, Real Madrid, Bayern Munich and others in some of the other top five European leagues.

Players on these teams can be of any nationality and are under contract with those club teams. However, they can also be called up to play for their national teams.

If you’re an English-born player playing anywhere in the world, you may be called upon to play for the English National Team.

Qualifying matches for international tournaments like the Euro Cup or the World Cup will also run during the course of a regular season. However, given the actual tournaments only come around every four years, the official tournaments will be played on their own schedule and not at the same time as regular season matches.

Of course, soccer betting odds are available for all of these competitions and tournaments both for individual game lines and futures betting.

All these competitions mean more to some teams than others, so before you start placing bets on Man City against a fifth division team in the FA Cup, be sure to check their lineup to see who is playing. For some teams, a FA Cup match may mean the world, but for a team like Man City who usually competes at the highest levels, it may hold much less significance.

Soccer truly is a global game. Unlike a sport like American football, any number of leagues from multiple countries might be pursuing the services of the same player soccer at the same time. A highly sought after soccer player could be purchased or “transferred” to any number of destinations, whereas the NFL is really the only competing force for top-end talent.

For example, take a player like David Beckham who had played at all the highest levels a professional soccer player could have hoped to play at. As his career wound down he made the move to the United States and the LA Galaxy. The Galaxy paid handsomely for Beckham’s services, but they received a star player with still a few years left in the tank and someone who put MLS on the global map.

The opposite side to that would be a player like Alphonso Davies, previously of the Vancouver Whitecaps in MLS. Davies is considered not only one of the best up-and-coming players in Canada, but also the world. That was no more evident than when he was purchased by one of the biggest clubs in the world (Bayern Munich) in Germany for over $20 million.

At the end of the day, soccer is a global business and your favorite player could be on the move to any number of countries from year-to-year. Some teams will transfer players to improve, while others buy and sell players like assets or stocks when they think they can cash in.

Before placing your next bet, be sure to monitor the transfer windows that take place during the season. A big addition or loss of a key player(s) could severely affect the odds for a team’s next game. For some leagues like MLS, which is still growing, there is often quite a bit of turnover from year-to-year.

If you’re a soccer fan in North America, there’s a league that’s been steadily growing right here in your backyard. Major League Soccer continues to grow across the USA while also featuring teams from Canada as well.

Typically, the MLS Cup has been held the first week of December, but it has recently been moved back slightly to take place in late November. Merely one and a half months pass from the time the confetti falls on the year’s MLS Cup champions to the time the preseason begins in mid-to-late January.

The competition features 16 teams who begin tournament play in approximately late February, with a champion being crowned by May.

CCL is just one of the additional competitions MLS teams compete in and which you can bet on. American teams will participate in the US Open Cup and Canadian teams in the Canadian Championship.

But if all those competitions still aren’t enough to satisfy your betting appetite, there are many other leagues, including women’s leagues, across America which you can bet on as well.

After MLS, the United Soccer League (USL), is likely the most well-known. Teams in the USL are either independently operated or affiliated with an MLS organization where the parent MLS team will use their USL affiliate for player development.

At times, as was the case with teams such as Orlando and Cincinnati, a USL franchise has the option to request and pursue expansion into MLS.

Get Started on Betting the Soccer Season

Now that you know the basics on how the soccer season and its many different competitions work, you should be ready to plan when to make your next bet. You can learn more about how to bet soccer and much, much more over at our full How to Bet on Sports Guide.